The study phase for the Atomium was launched in January 1955 and major wind tunnel tests were conducted in order to model the wind resistance of a set of spheres, because this was the first such construction in the world.

The decision was taken to build the framework of the spheres in steel and to coat their outer shells in aluminium.

Given the short time available to complete the building, two companies were hired for the construction: the Haren Construction company, near Brussels, for the feasibility studies and design, and the Ateliers de Construction de Jambes-Namur to assemble the various pieces.

Since the construction had to be fast and simple, the Atomium was designed like a meccano set with as many standardised parts as possible that could be easily assembled on the site.

Its foundations are made of four groups of piles and reinforced concrete slabs. These piles were driven down to a depth of 17.5 metres, and each can bear a load of 55 tonnes.  The building’s central foundations are supported by 59 piles.

The frame of the spheres includes twelve large semi-circular arches in box steel that are welded together. Highly elastic steel was used to cope with the expansion due to variations in temperature.

The outer surface of the spheres was a challenge, because no existing structure could be used as a model. The shell or “skin” of each sphere is made up of 48 identical spherical triangles. Each of these triangular panels is made up of smaller triangles. In all, this means nearly 9,000 plates for the outer covering. The plates were bolted together, with plastic joints between them to cope with the expansion of the metal.  The spheres were subjected to an electrochemical treatment and anodised to give them the shiny appearance imagined by André Waterkeyn and the Polak brothers.

Windows were installed in the top sphere and in the lower spheres that ended the visit in 1958. The other six spheres feature elliptical skylights to add to the artificial lighting.  No windows were made in these spheres to limit the vantage points and avoid slowing the flow of visitors.

After 18 months of preparation and testing, construction began in march 1956. The various parts were erected progressively: the first vertical mast was installed in January 1957, the base sphere was put in place in May 1957, the central mast and bi-pod braces were erected between June and September 1957. The spheres were assembled progressively between October 1957 and March 1958. The Atomium was completed on 25 march 1958, just one month before the opening of the Expo.

Only six spheres were open to the public, for practical reasons regarding the circulation of visitors. An exhibition highlighting the peaceful uses of nuclear energy was installed in four spheres (base, central, and two lower spheres). A 250-seat restaurant was created in the top sphere by the Belgian architect Stanislas Jasinski. 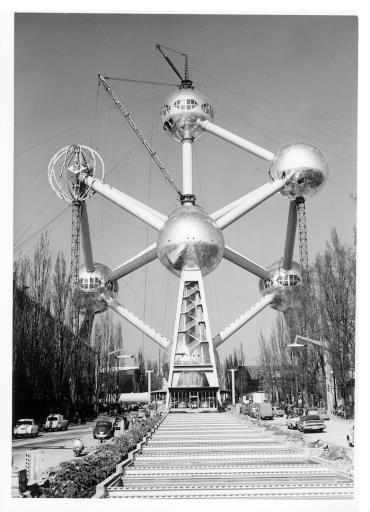 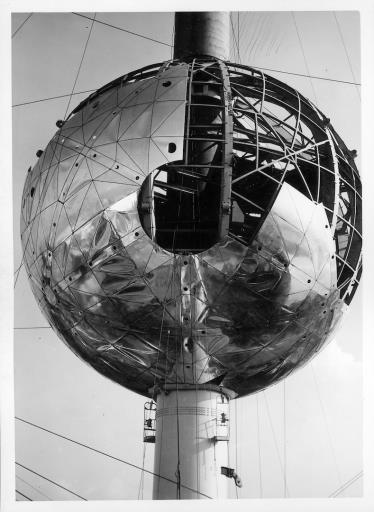 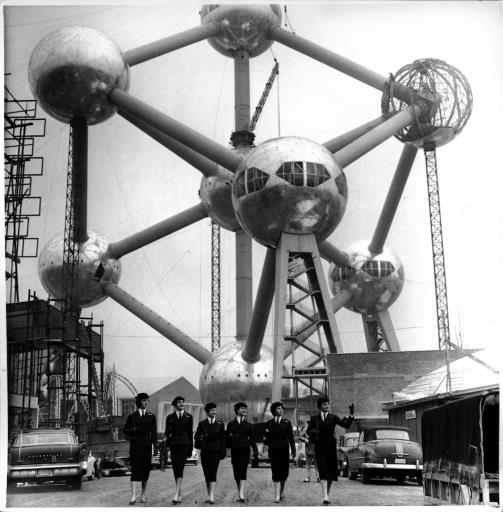 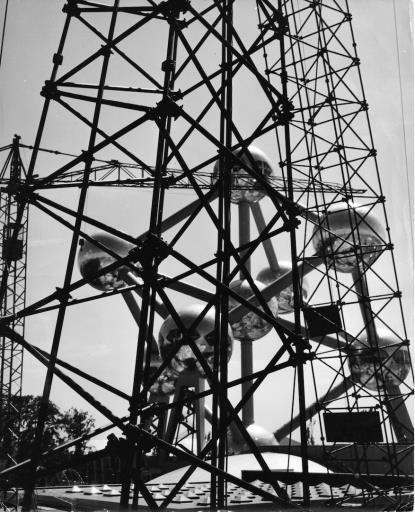 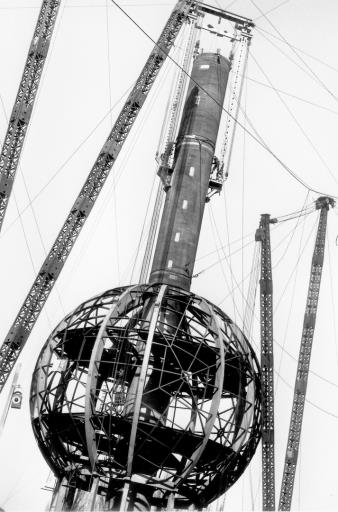